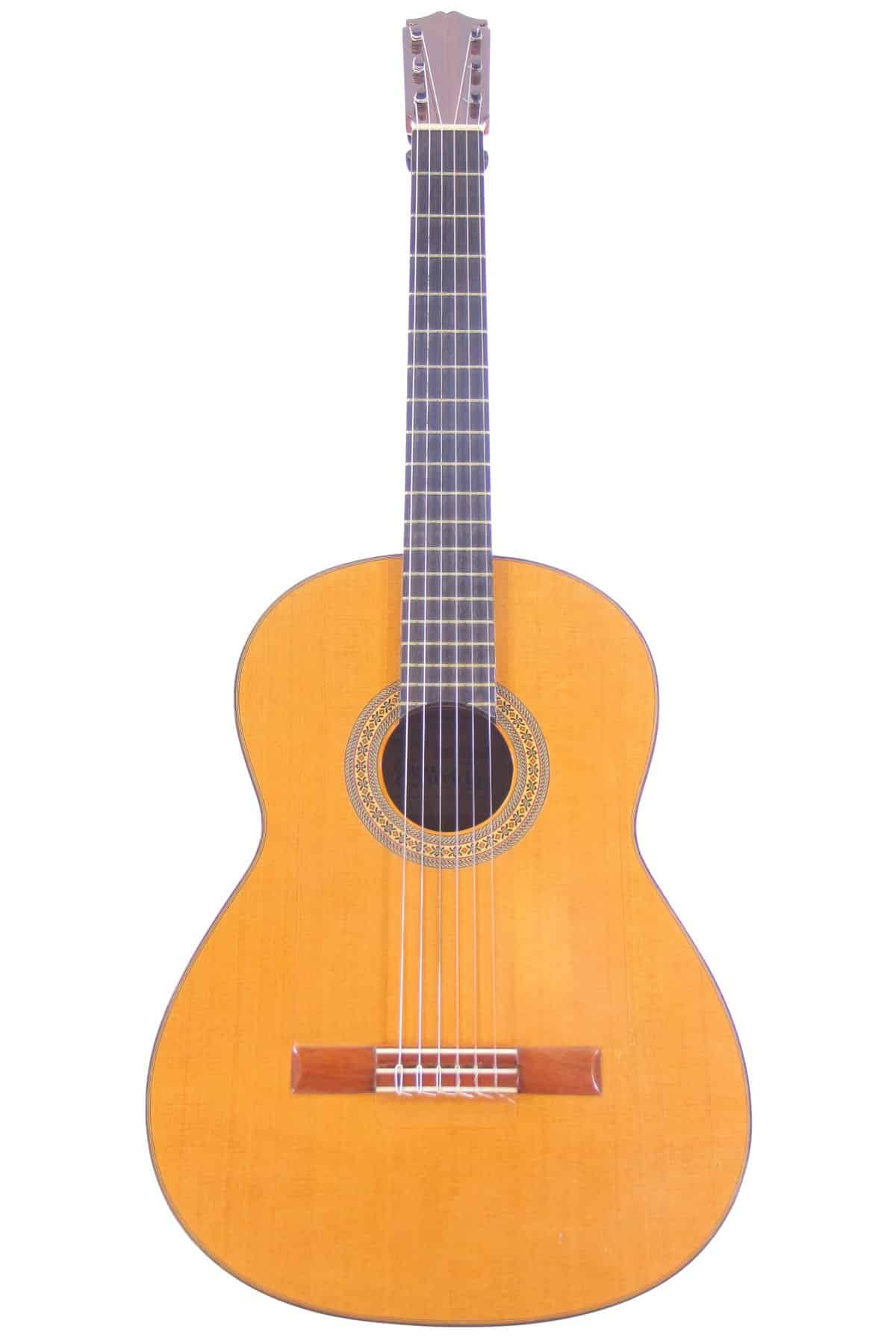 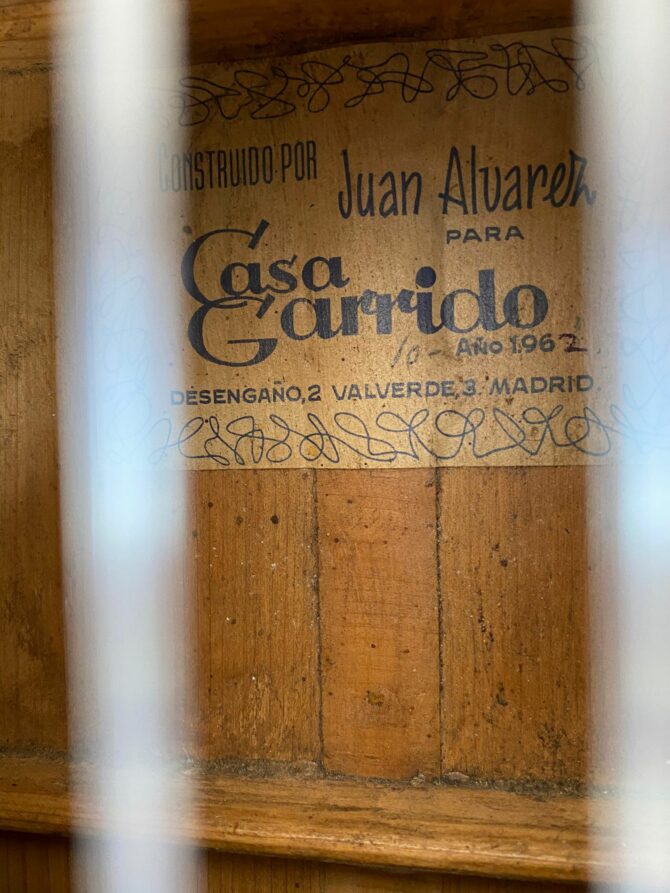 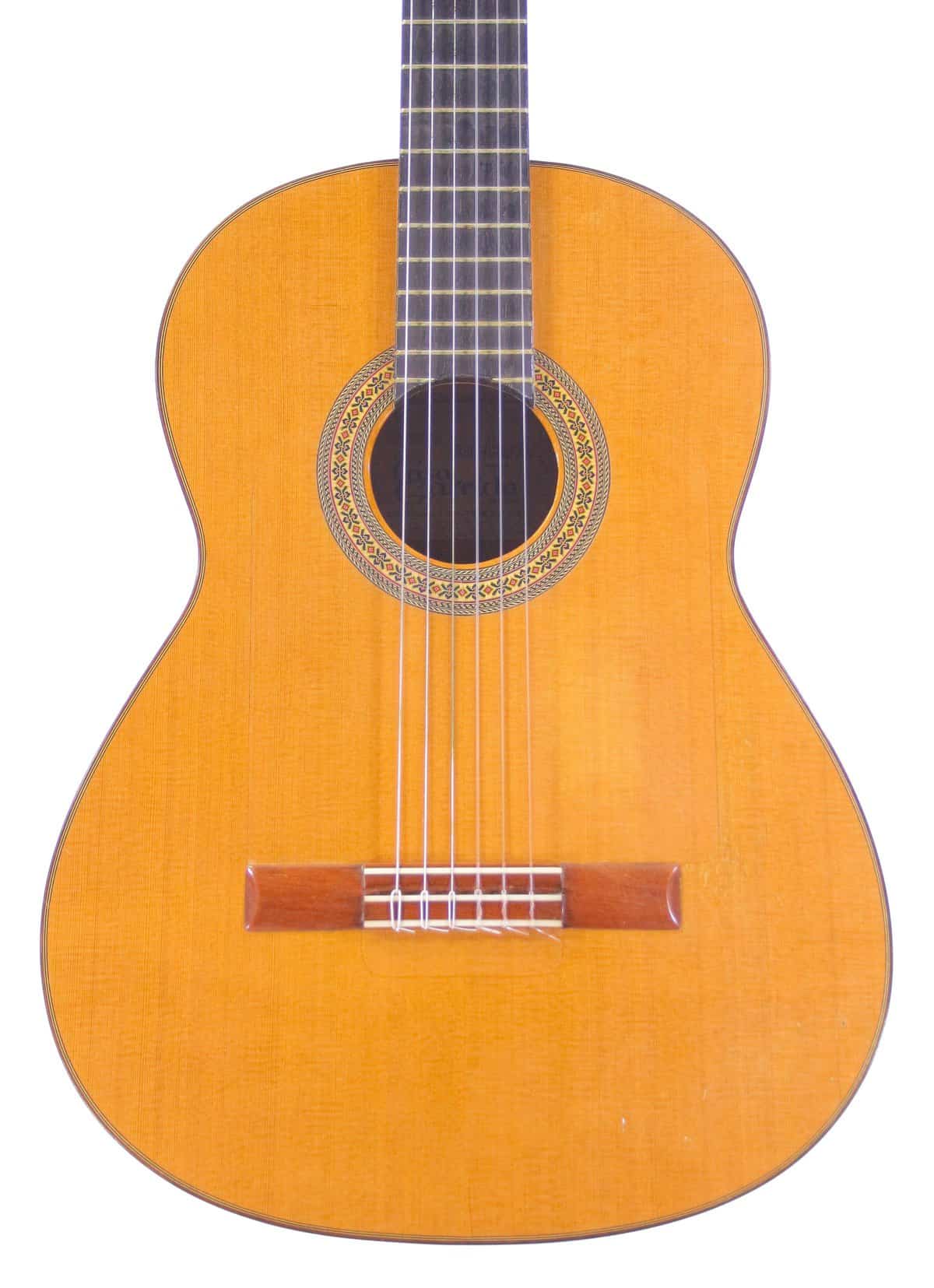 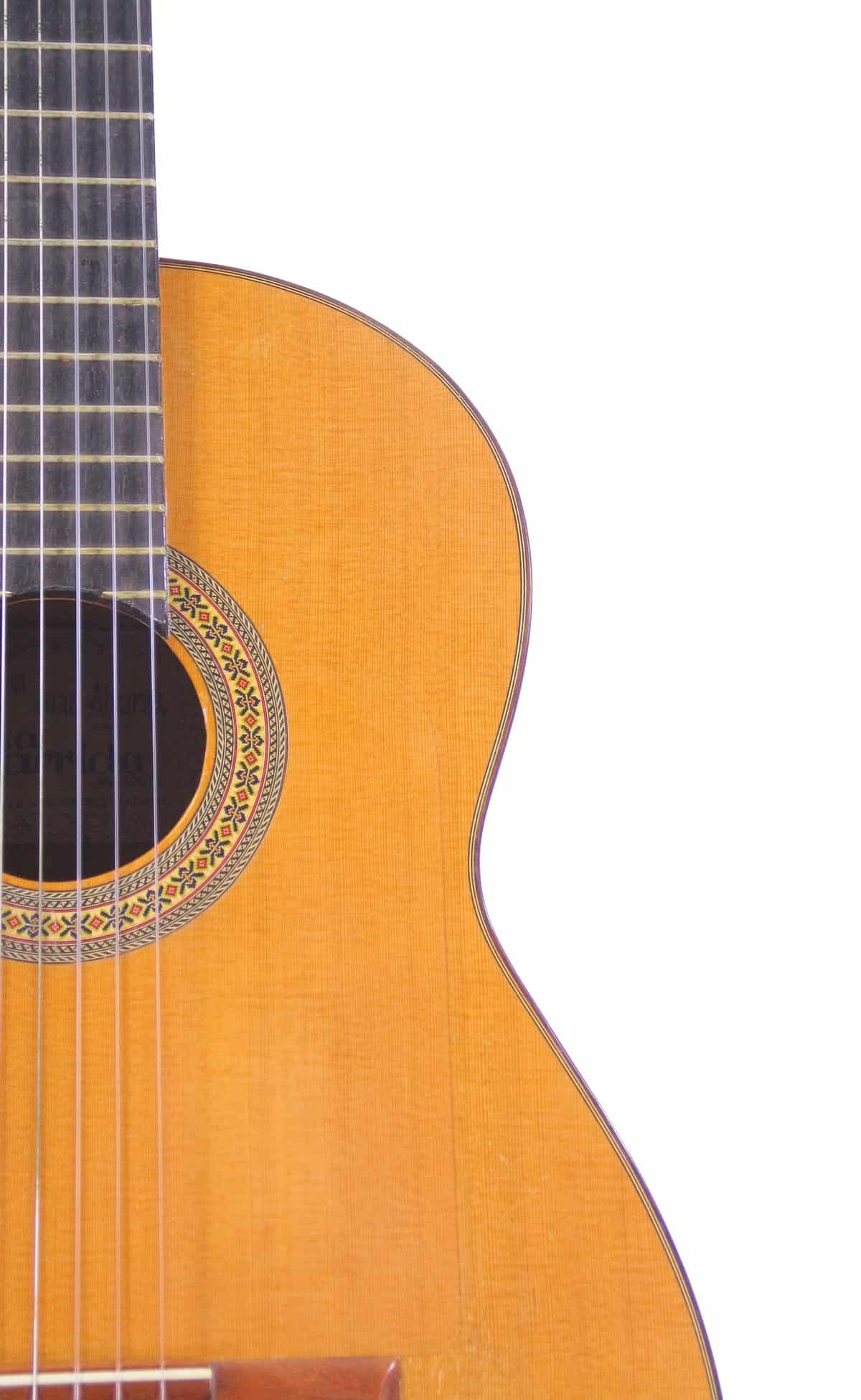 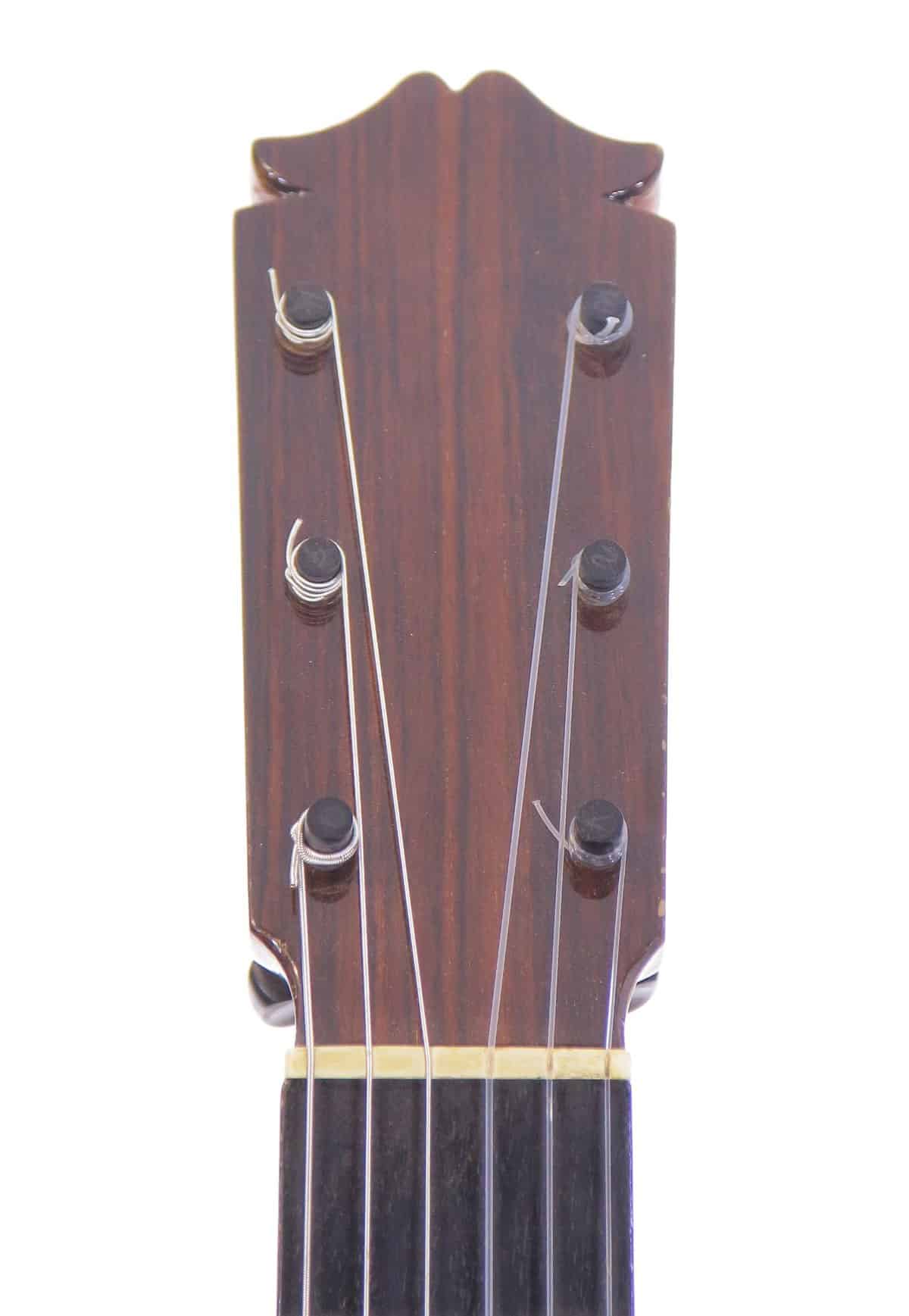 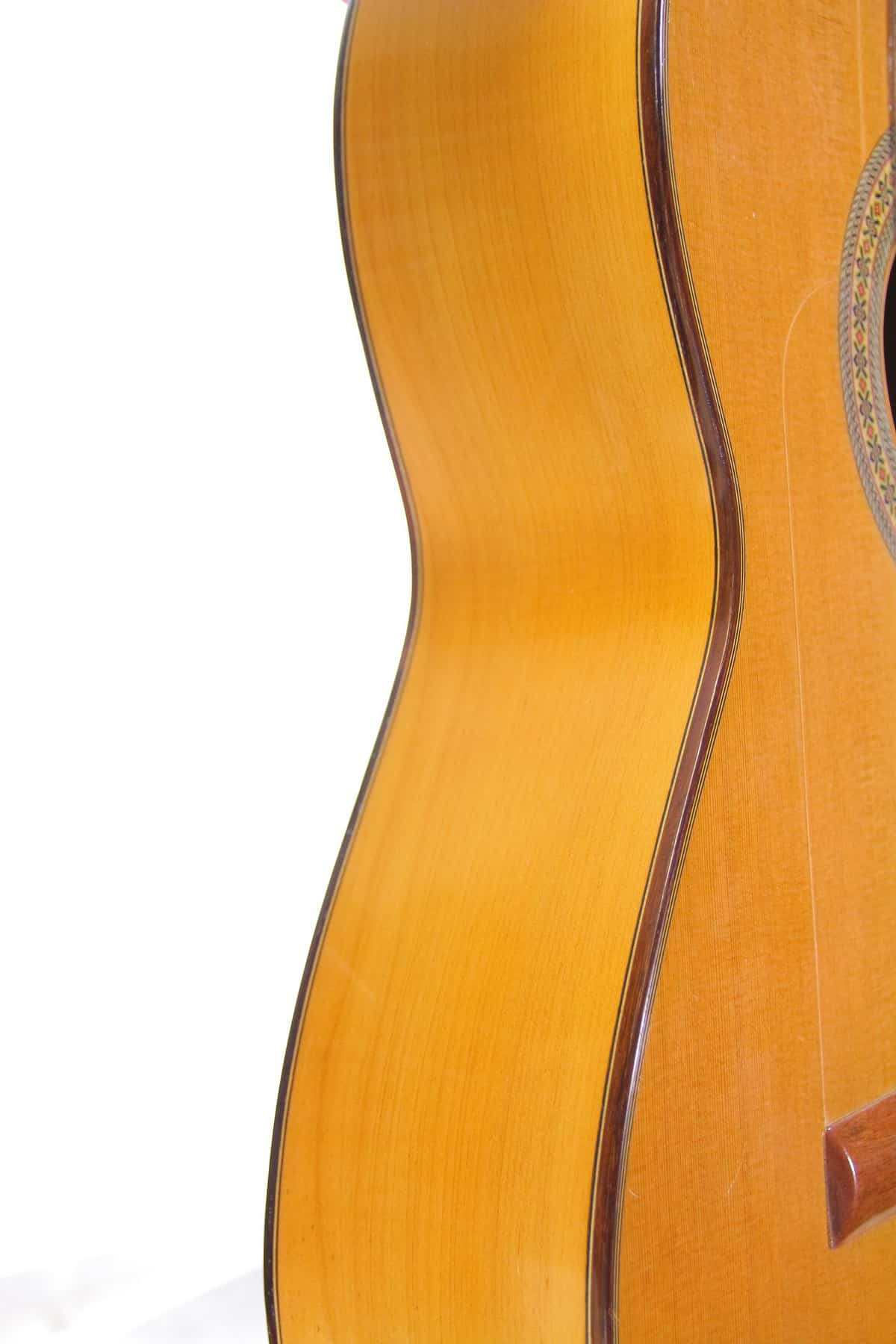 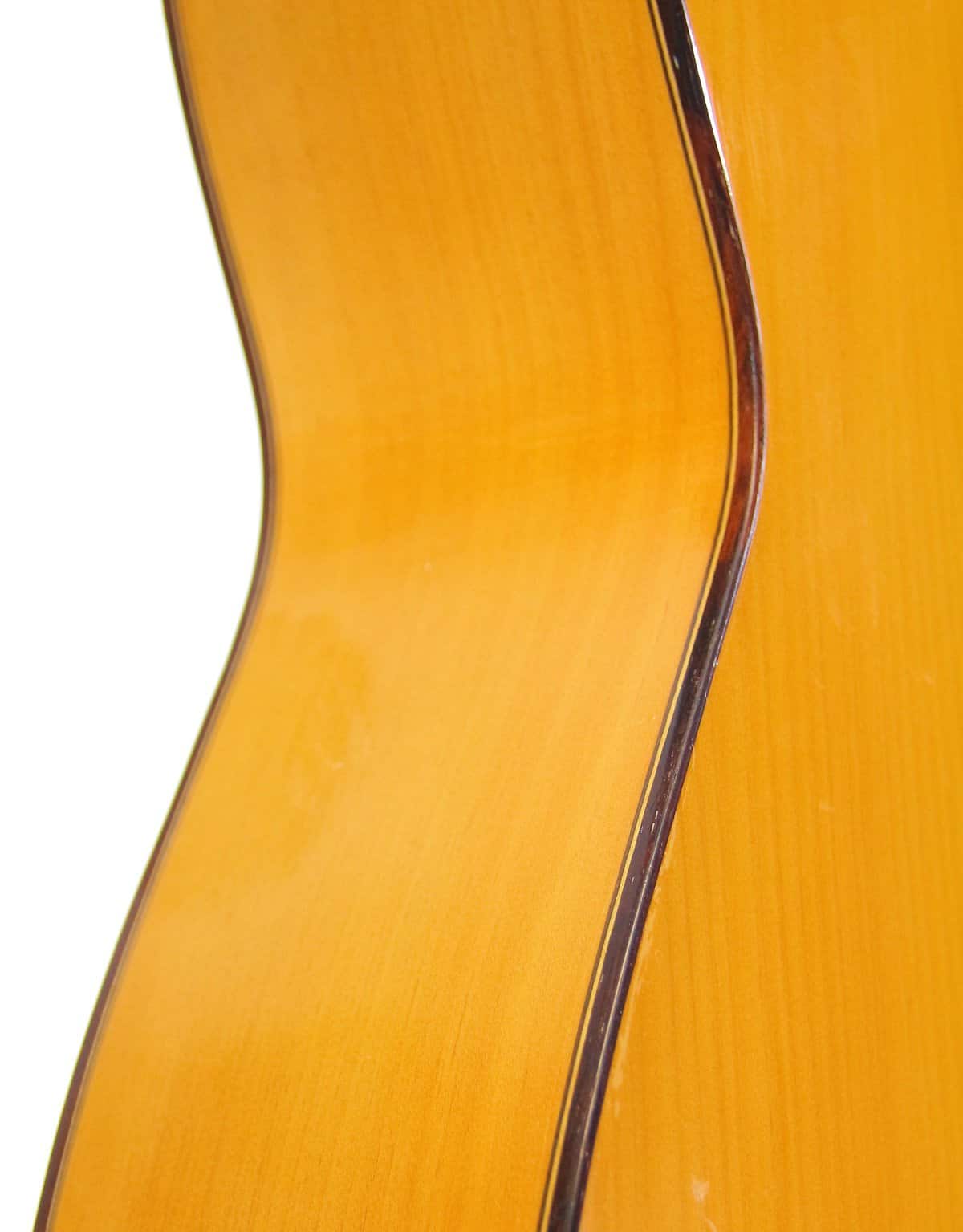 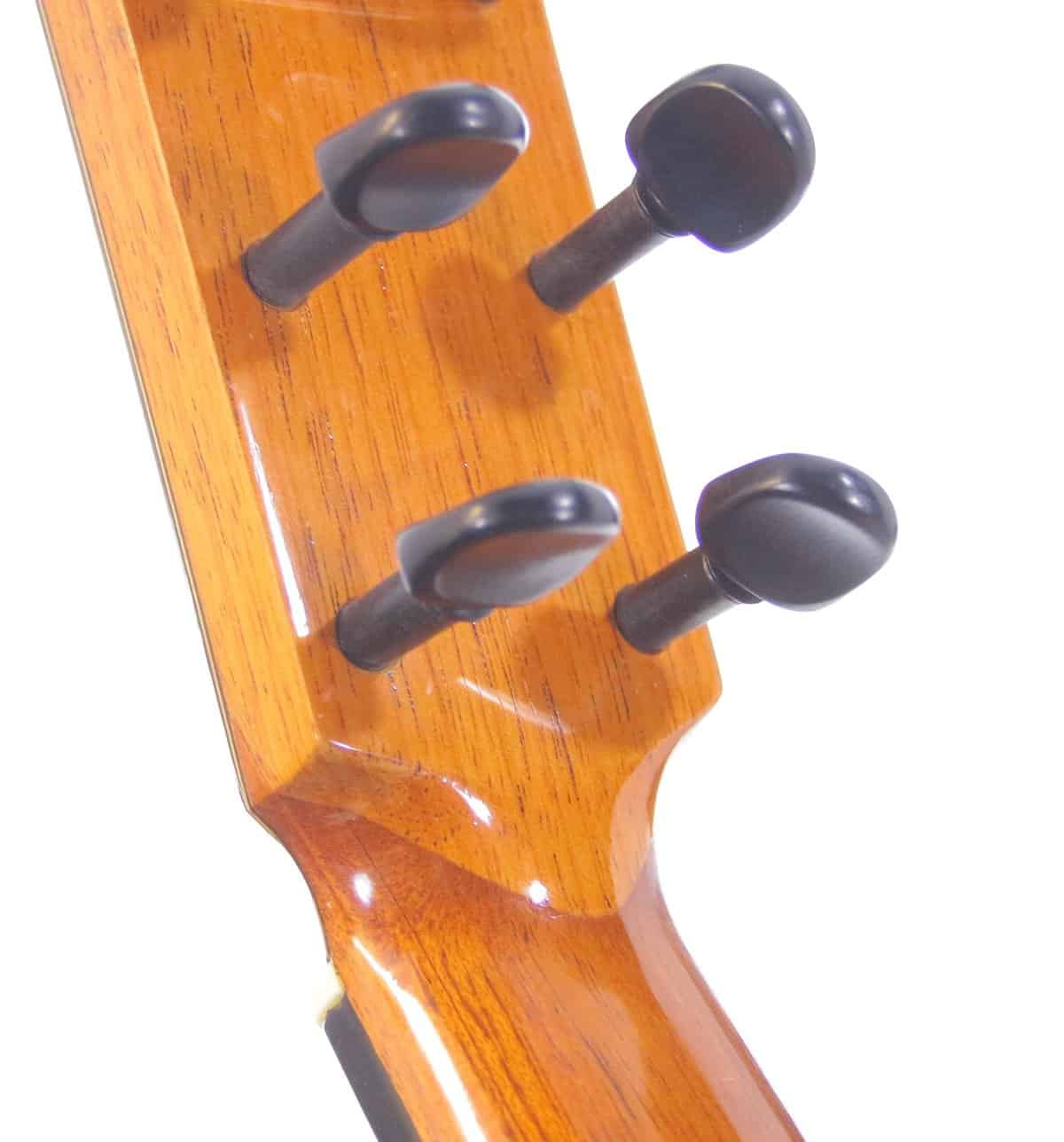 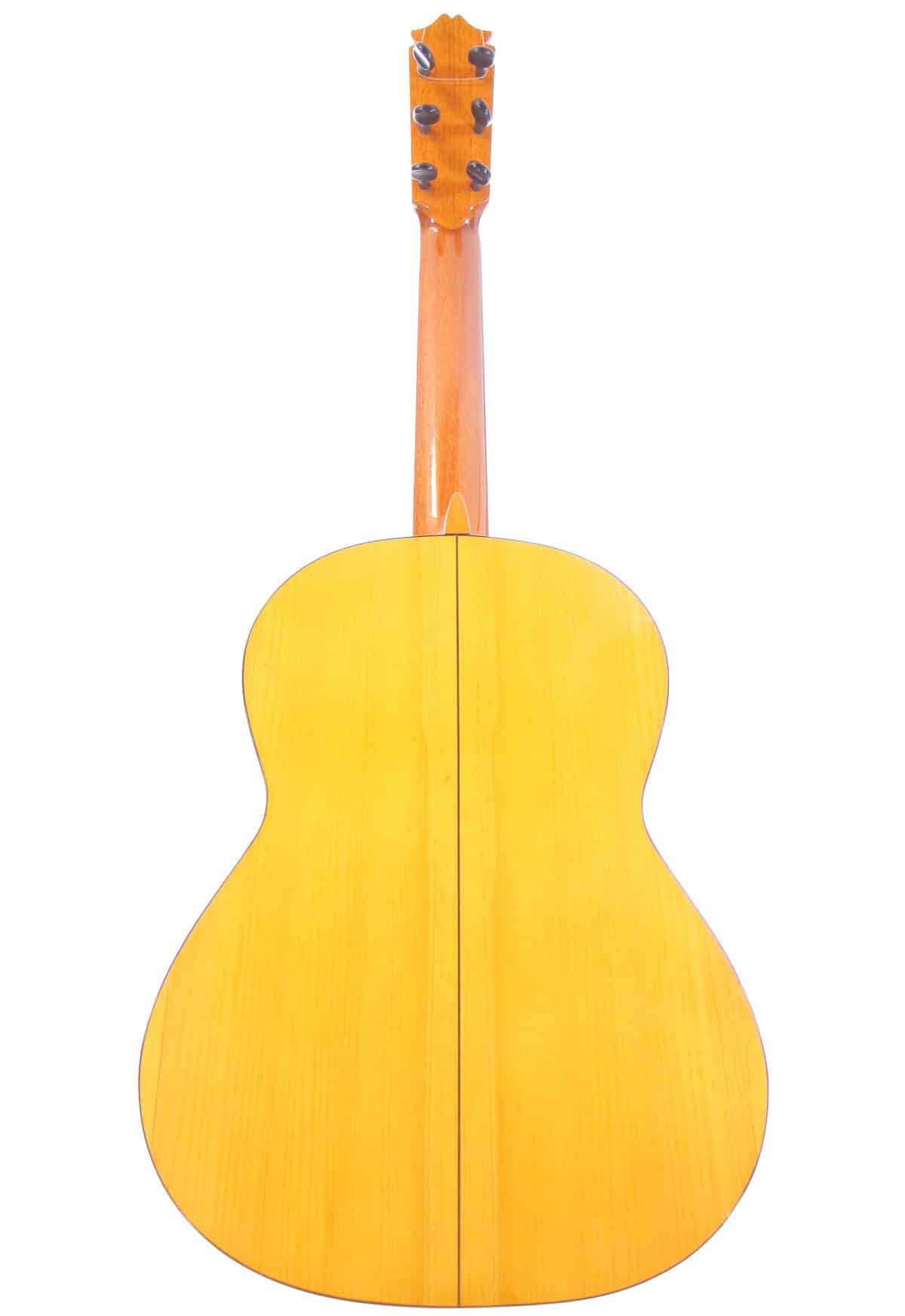 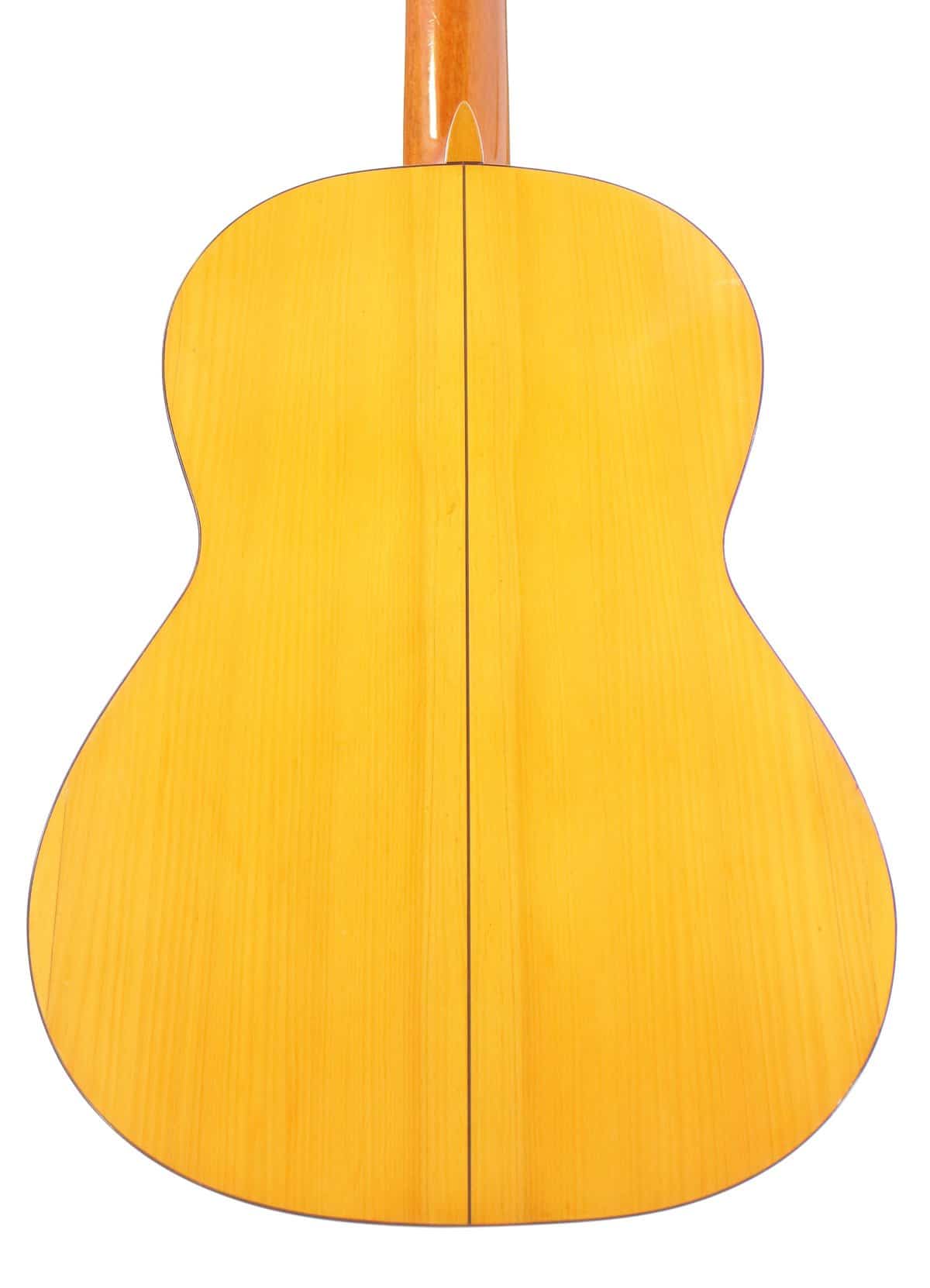 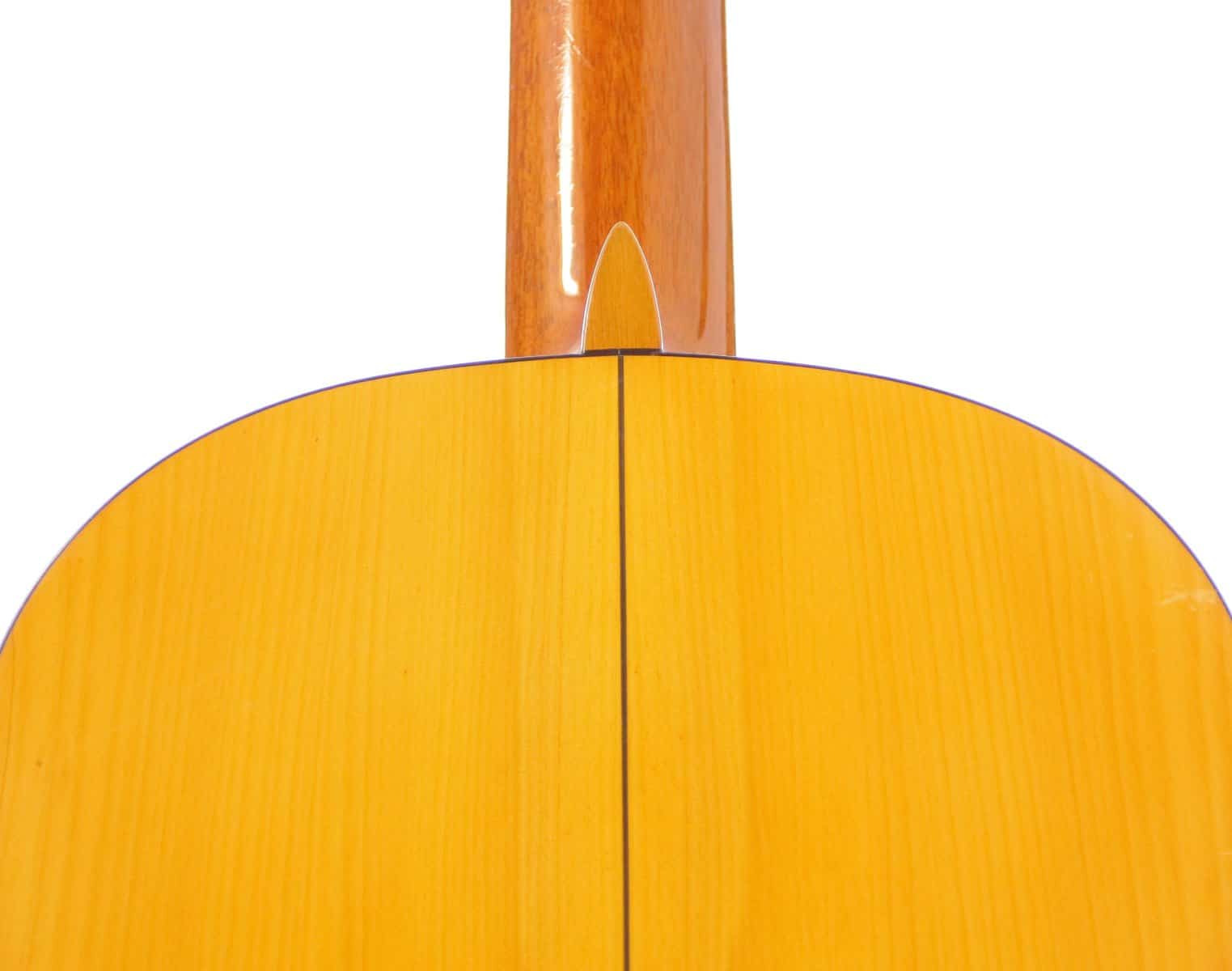 Juan Alvarez 1962 – impressive flamenco guitar in the style of Santos Hernandez and Marcello Barbero – even Eric Clapton played a similar guitar for “Tears in Heaven”!

Juan Alvarez is a guitar maker of the very highest level. He was born in 1932 and started building guitars in the 1940s together with his older brother Lorenzo, a cabinetmaker.
Later, Juan became friends with Marcelo Barbero (1904-1956), one of the great guitar makers of the last century. He became Juan’s mentor, providing him with advice and support, from which he says he benefited enormously. Together with Marcelo Barbero, he also had the opportunity to look into the world of the guitars of the great Santos Hernandez, because Marcelo Barbero worked for Santos Hernandez’s widow for some time after his death.

In 1952, Juan Alvarez founded his own workshop where he worked until shortly before his death and also trained his son.
Many professional guitarists played and still play guitars by Juan Alvarez. His guitars follow the tradition of Santos Hernandez and Marcelo Barbero.
Eric Clapton played a Juan Alvarez guitar and recorded “Tears in Heaven” with it. He also played his Juan Alvarez at his famous MTV unplugged concert in 1992. This guitar was auctioned in 2004 for $253900.

This beautiful guitar was built by Juan Alvarez in 1962. It has a cedar top and cypress back and sides. The scale length is 655 mm and the nut width is 52 mm.

The condition of the guitar is good. The shellac has been professionally refreshed and the guitar has the usual flamenco playing marks! Two minor repairs on the back have been done perfectly.

It comes in its original case.