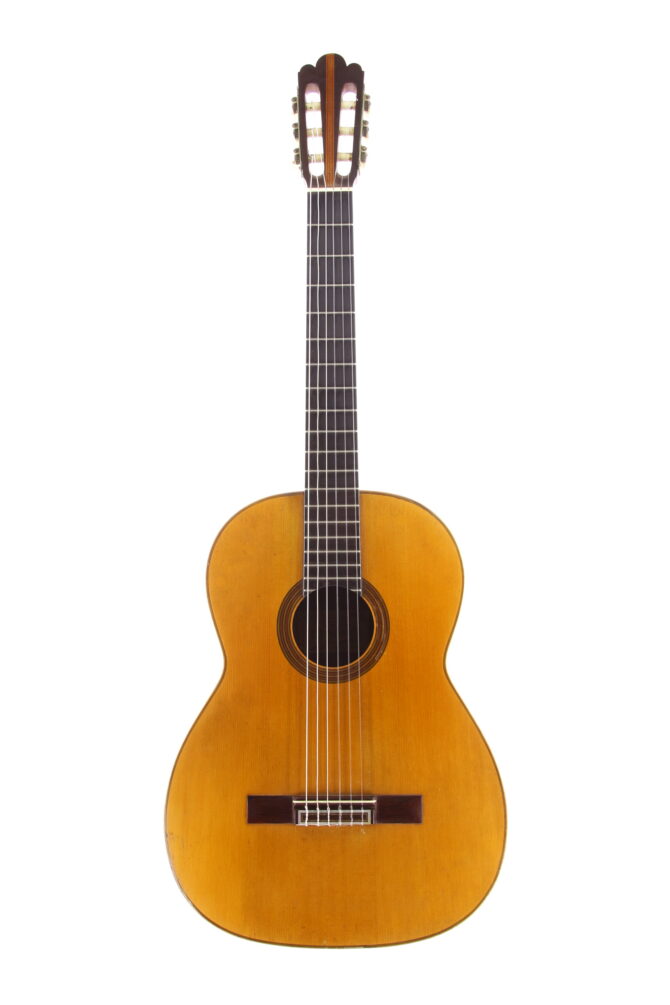 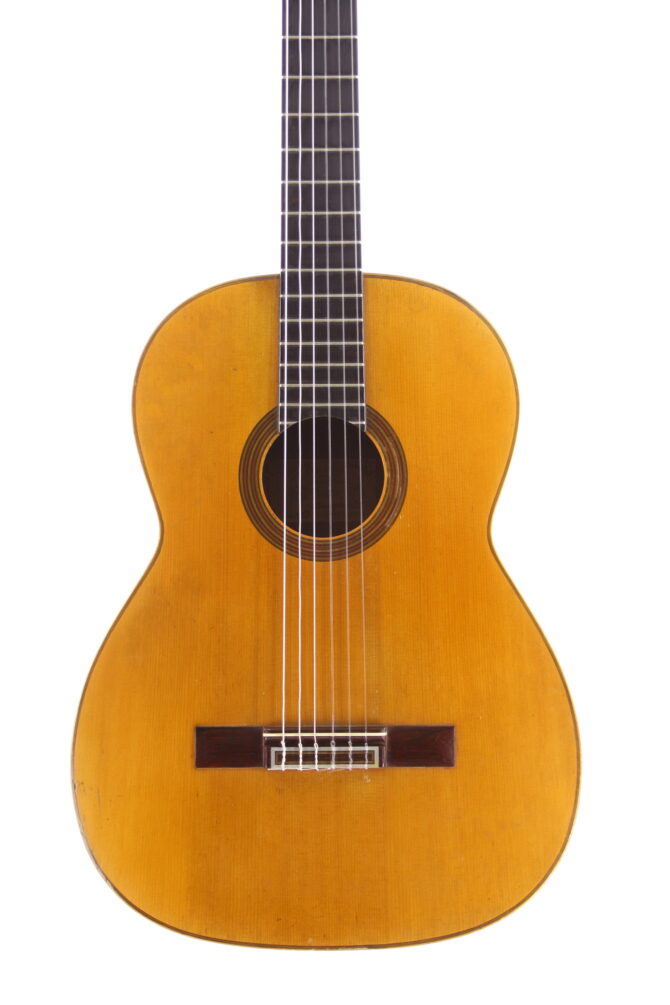 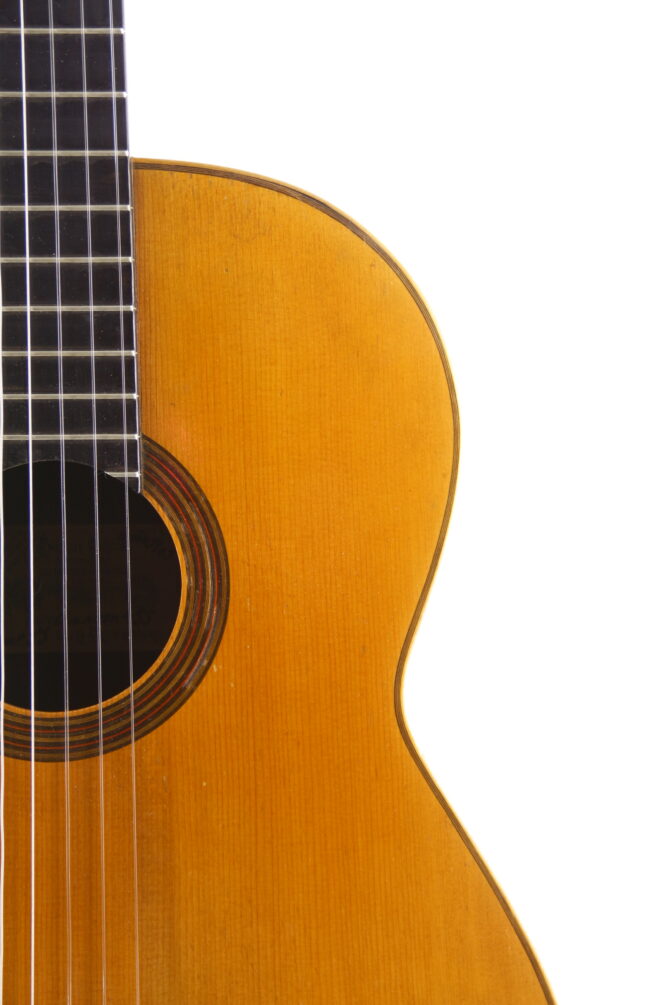 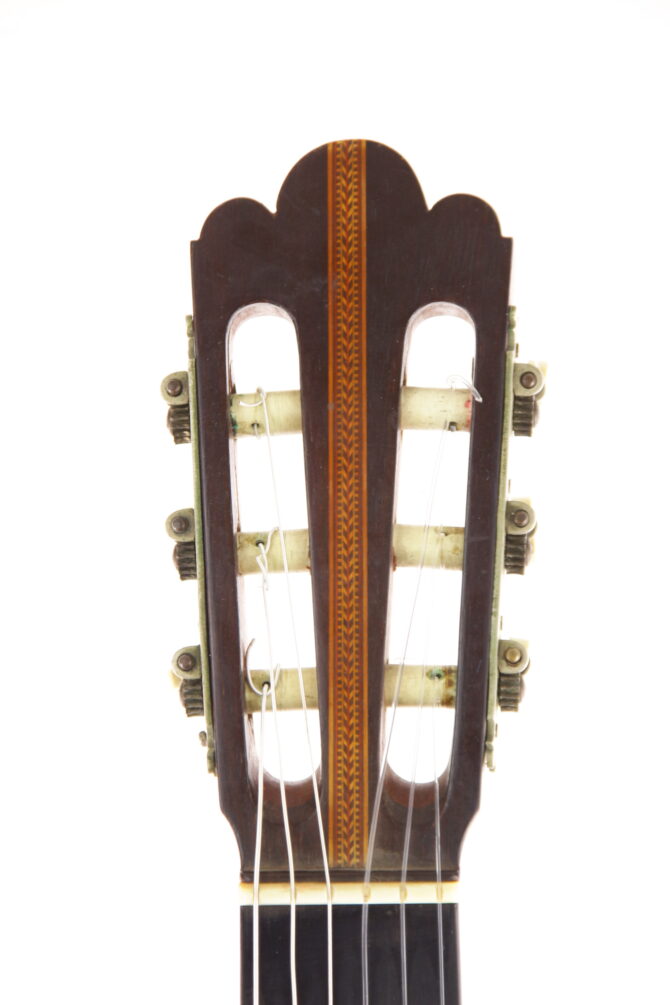 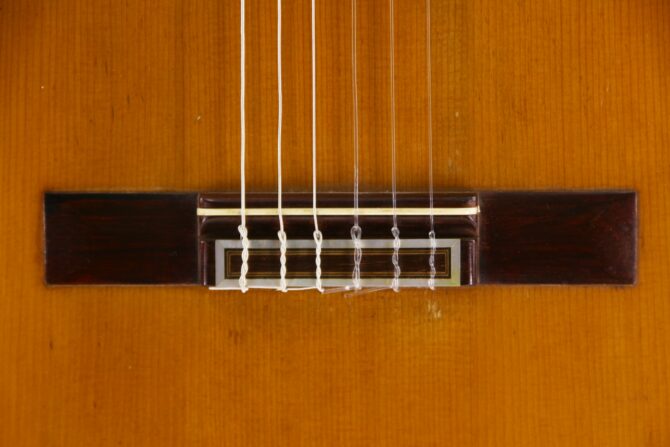 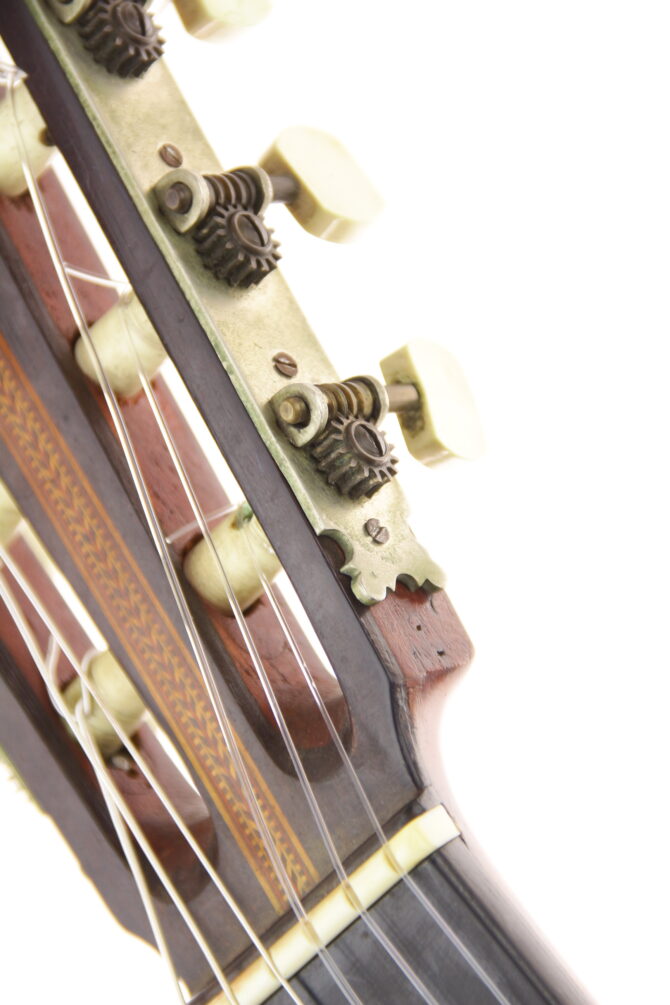 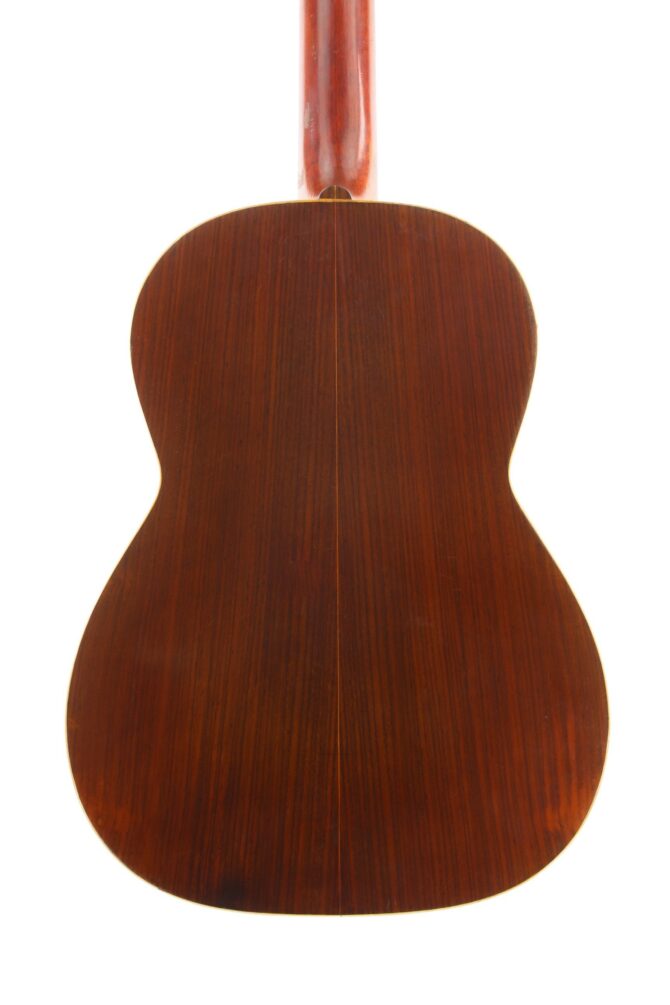 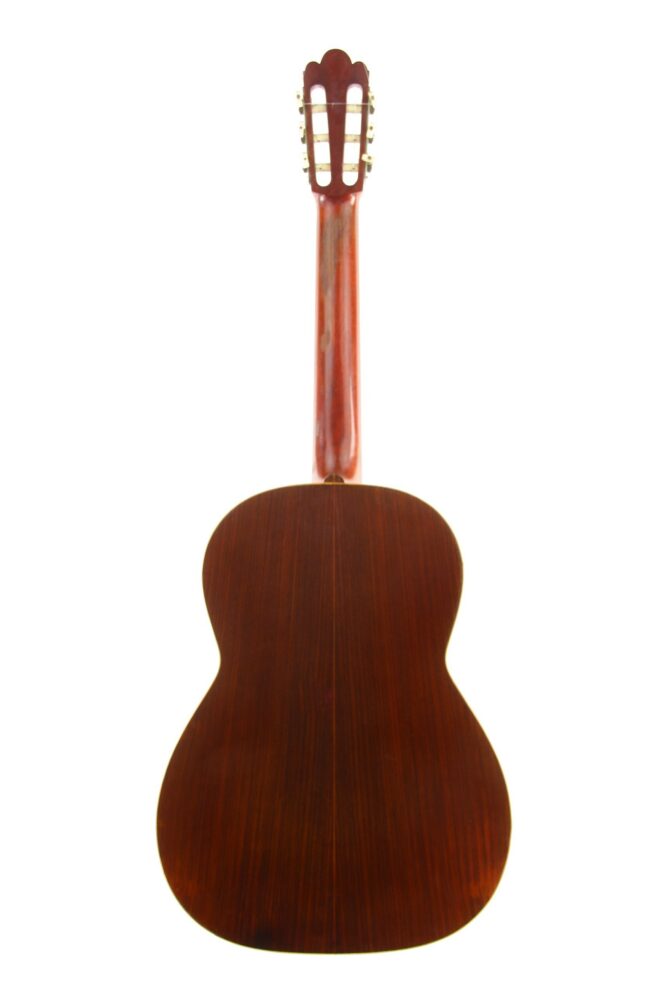 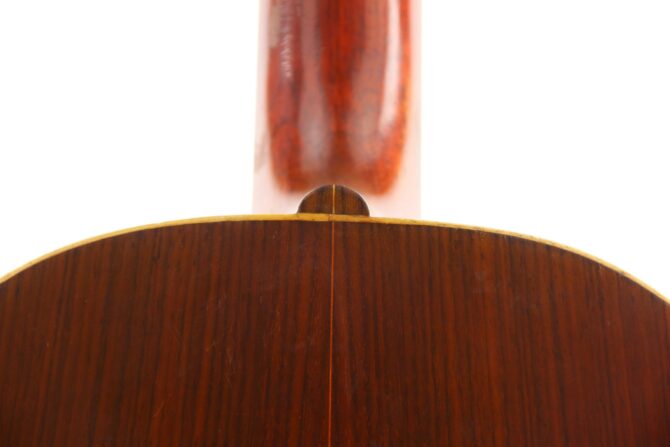 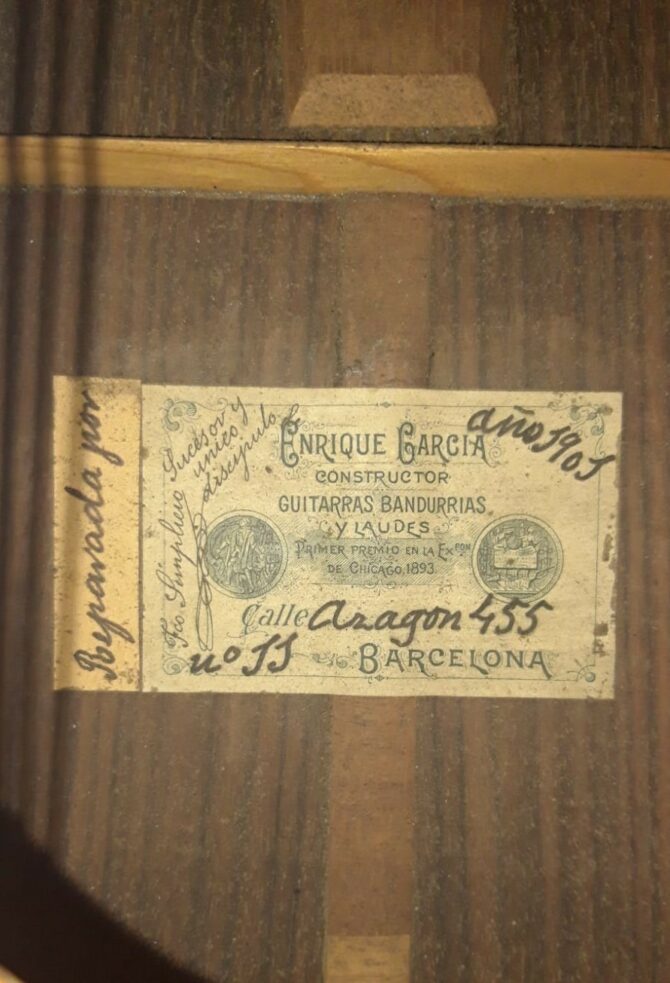 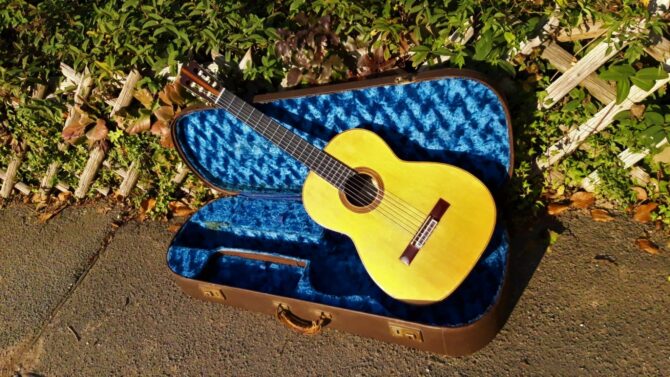 Enrique Garcia rare classical guitar from 1901 – truly a piece of art and a treassure of guitarhistory!

Enrique Garcia was born in Madrid in 1868. Although he was the son of a guitar maker, Juan Garcia, in 1883 he began an apprenticeship with either Manuel or Jose Ramirez I (or likely both), and continued to work in Madrid for many years. In 1893, his guitars won first prize at the Chicago World Fair. Garcia was evidently very proud of this acheivement as he represented this in pictorial form on his labels after receiving the award. Shortly afterwards, in 1895 he left Ramirez and Madrid for Barcelona where he set up his own workshop as an independent builder. Garcia is considered to be the founder of the “Barcelona school”, or “Catalan” style of guitar making. His style influenced subsequent generations of Barcelona makers including Francisco and Miguel Simplicio, Enrique Sanfeliu, Enrique Coll and Ignacio Fleta. Perhaps the most important hallmark of his style is the increased stiffness in his soundboards – his guitars commonly featured 8 assymetrical fans instead of the traditional 7 – as does this guitar (notably – years later Ignacio Fleta would increase the number of fans to 9). Garcia was arguably the most sought-after and famous maker at the turn of the century (1900). His reputation very early on was truly international, largely thanks to Domingo Prat and Francisco Tarrega, who both played his guitars. By 1912 he was exporting many of his instruments, primarily to South America, where a thriving and very important guitar scene based mainly in Buenos Aires, Argentina and Montevideo, Uruguay was forming. His guitars have always been prized by performers and collectors for their intimate charm and unique style.

This is a wonderfully well-preserved example of a very nice guitar from Enrique Garcia.
The sound is magnificent – great depth to every note up the entire register with a big bottom-end and lyrical trebles. It has it all – very lively and “friendly” with great charm and personality. Garcia instruments in this condition with this quality of sound are hard to come by, so we are proud to present this very rare and collectible instrument by one of the great masters of the twentieth century.

It has a spruce top and rosewood back and sides. A 650 mm scale length and 51mm nut width.

The label says restored by Francisco Simplicio – we think he has made some adjustments to the tuners and has fixed 2 cracks on the left side of the guitar. All this has been done long ago.

The guitar comes with the original hard case and some articles.