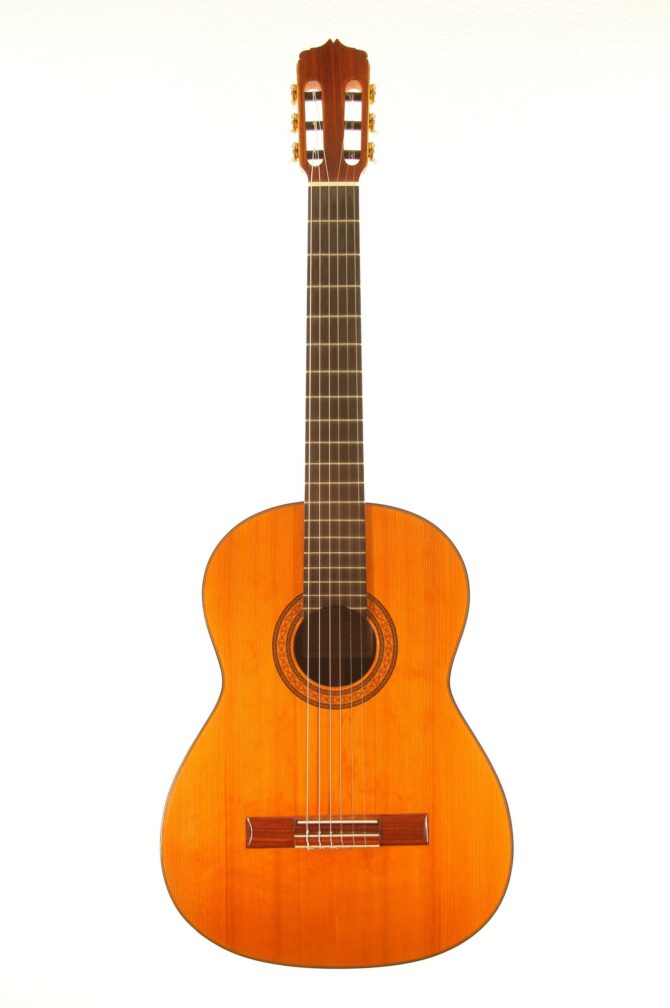 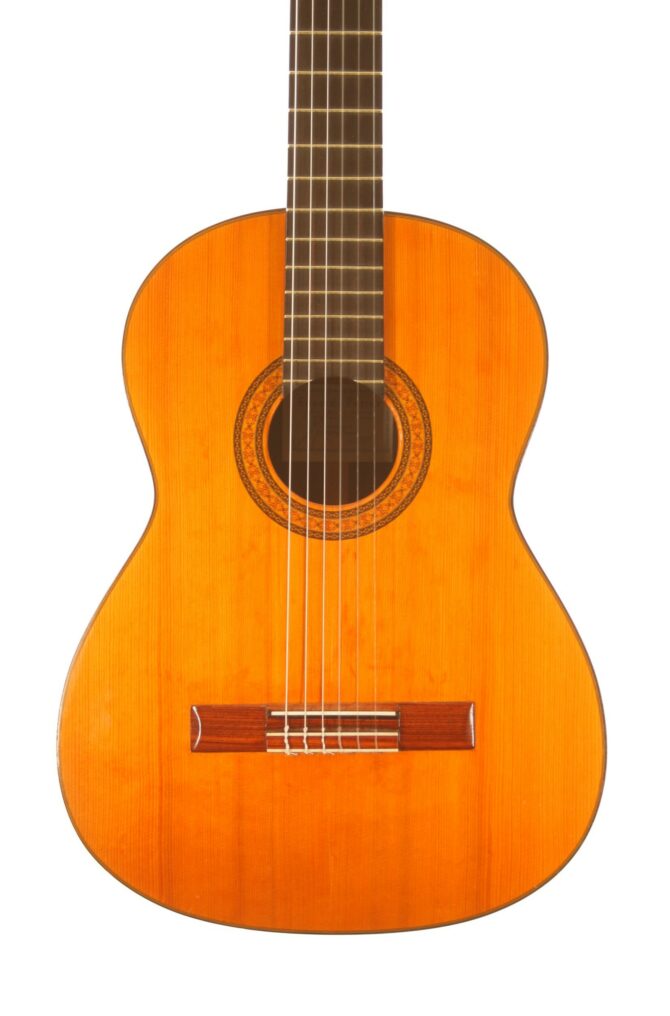 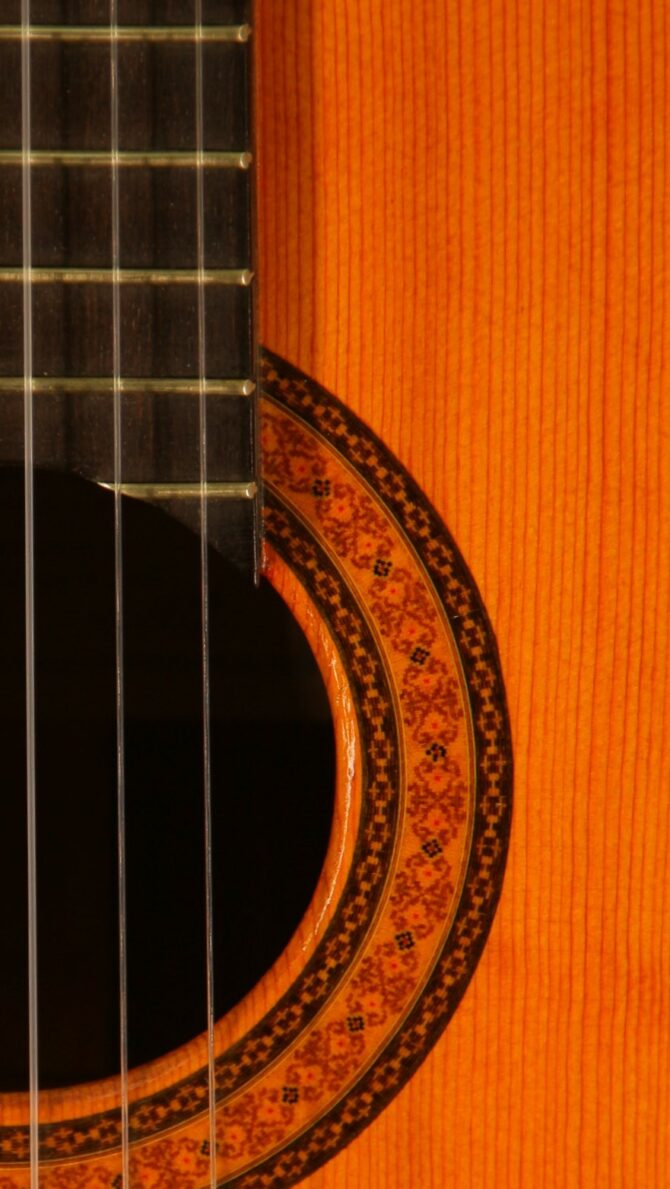 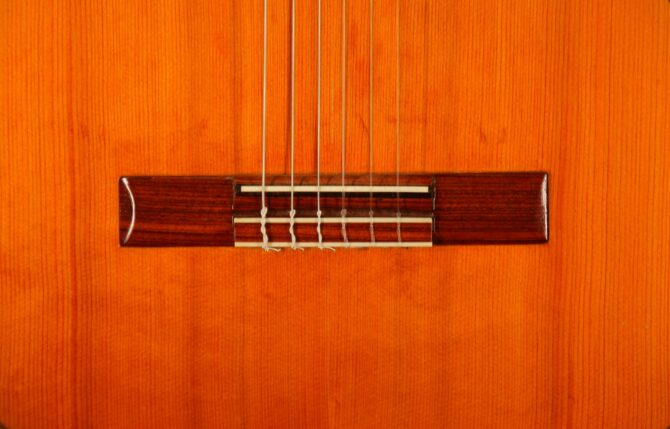 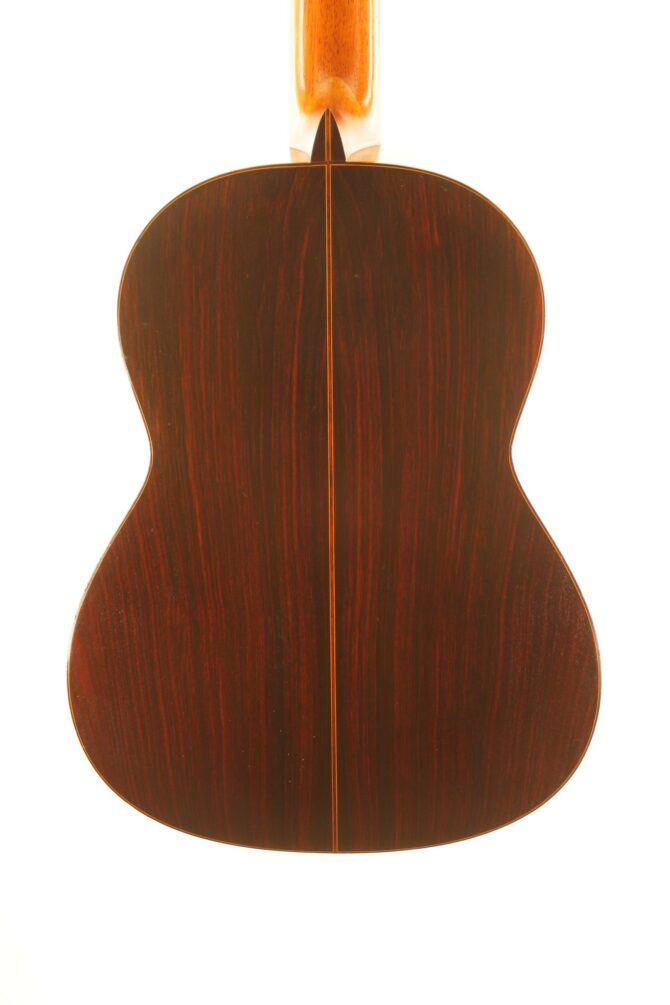 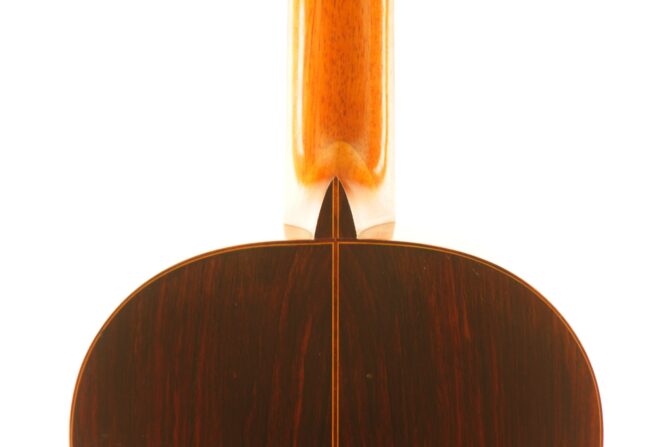 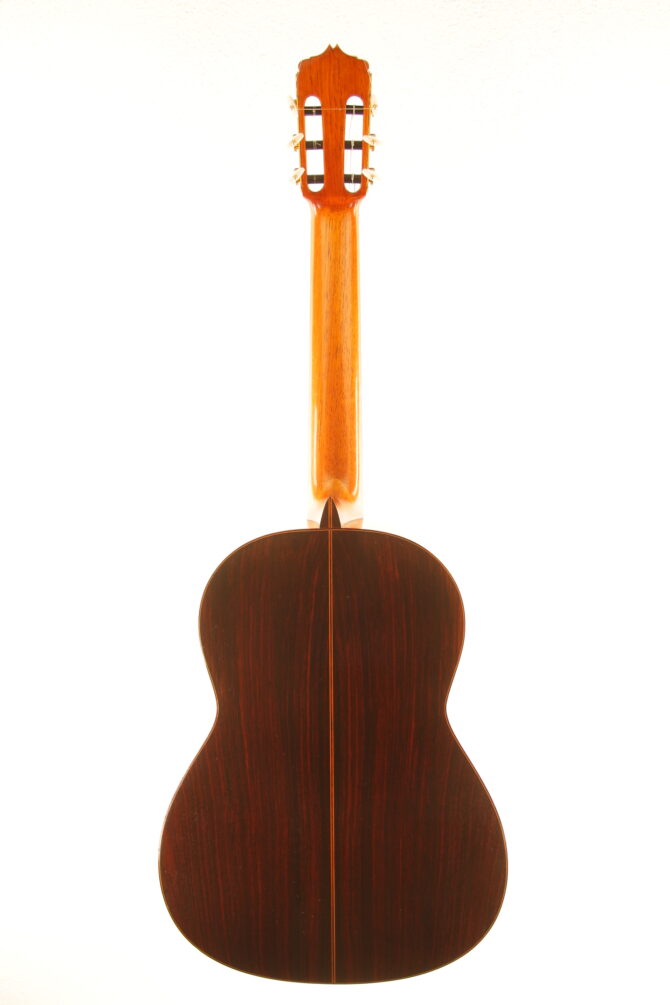 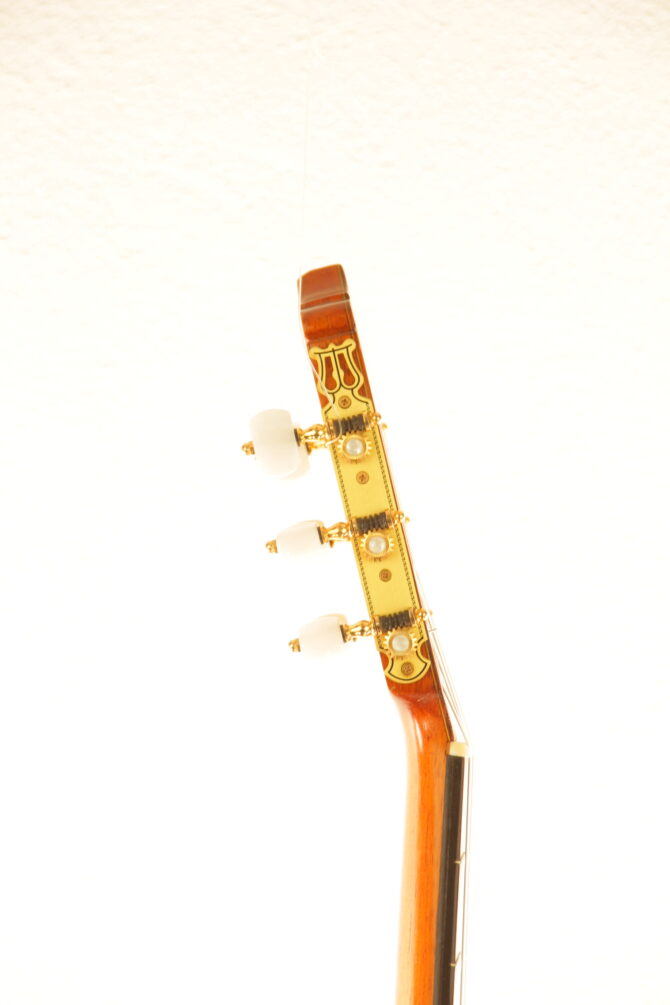 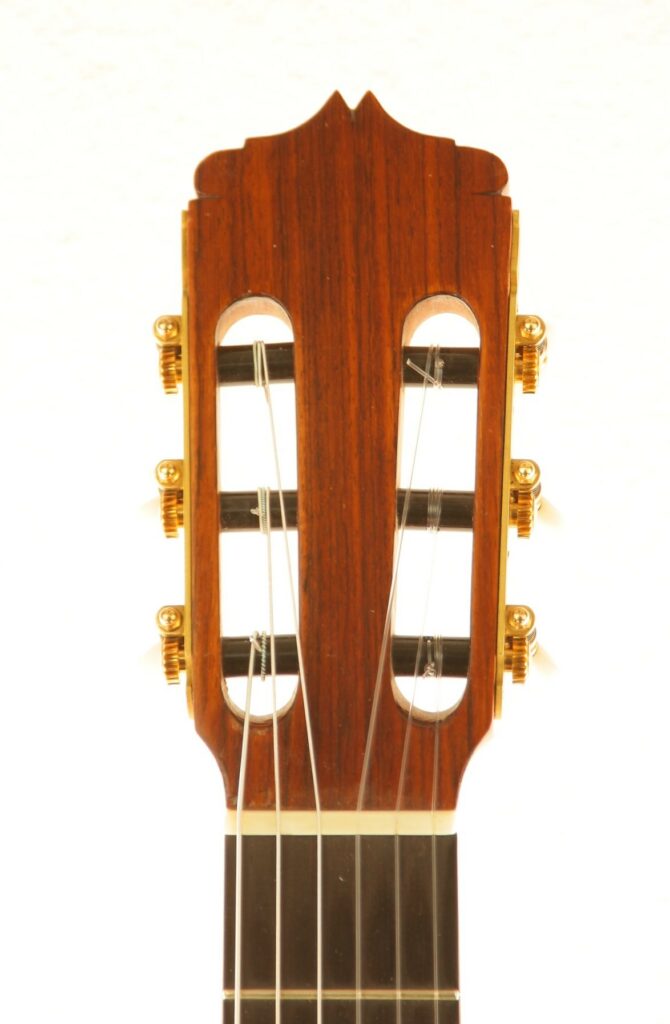 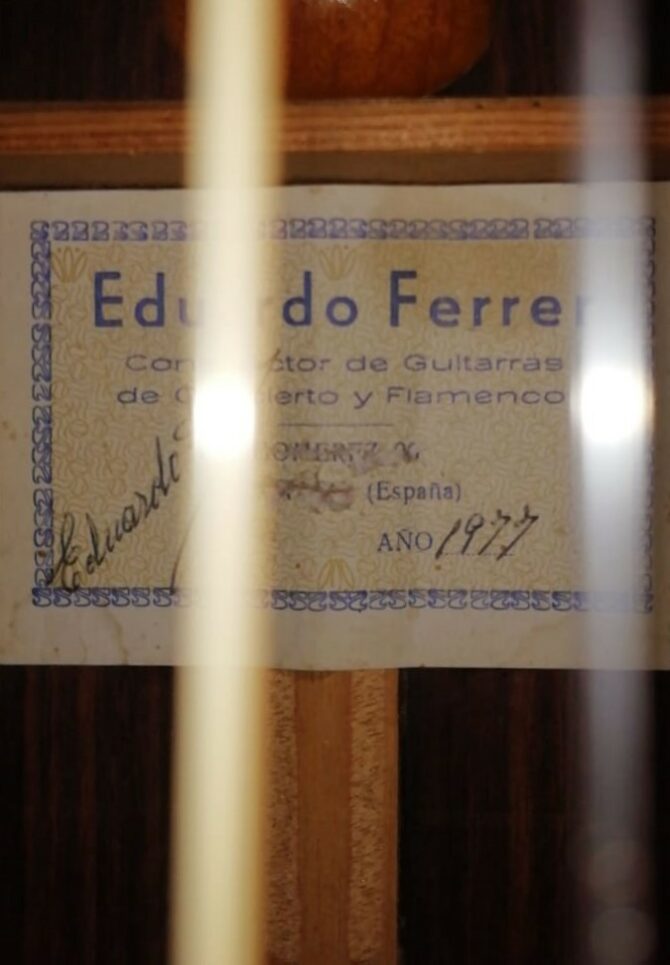 Eduardo Ferrer 1977 – a guitar that definitely stands out! It has a huge body and is constructed in a light way using best materials and finest craftsmanship!

Eduardo Ferrer is one of these outstanding luthiers in Spain. He, was the nephew of Benito Ferrer, the founder of the famous Granada School. He was the master of most guitar makers in Granada and is therefore a key figure in the history of guitar making.

Eduardo Ferrer was born in 1905. When he was about ten or twelve years old he entered his uncle Benito Ferrer’s shop as an apprentice, he also attended seminar school for a while, thinking he would like to be a priest, but he changed his mind. When his uncle died in 1925, Eduardo took over his shop.
His life was a long adventure: from his apprenticeship when he earned nothing, to the war when he sold a guitar for twenty pesetas, which seemed to be a fortune. Like a luthier, his work followed closely that of his uncle. Although he tried several experiments, he continued to resort to the tried and true traditional methods of Benito Ferrer and Antonio de Torres. In his opinion, they had explored everything that needed to be explored and there was nothing new to invent.
His importance as a luthier, however, was also as a teacher. Almost every guitar maker working in Granada today learned from him or his art from those who did. His apprentices include José Castaño and Milan continue their studies with him after the death of his uncle; Juan López who died during the war, Miguel Robles, Manuel Fernández, Francisco Manuel Díaz, Manuel López, Antonio Marín, his own son José Ferrer and many more. He also helped train classical guitar makers in Japan. He spent 3 months each year between 1966 and 1968 in Japan, showing Yamaha workers how to build guitars.

This guitar is a classical guitar from 1977. It is outstanding and we immediately were amazed about this wonderful guitar. It has a slightly deeper body (105 mm at the upper and 110 mm at the lower bout). Together with the light construction (7 light fans – very similar to what his student Antonio Marin uses) and the fine materials, it produces a magical almost mystical sound. It is loud and clear.
An elegant example of Ferrers best instruments, during the peak of his work.
The tone is gorgeous – rich and silky, smooth and full, marrying together the best qualities of a spruce-top guitar with the unique sound of Granadas greatest guitars. The separation between notes is clear and incredibly balanced, across the entire range. It has develloped a nice vintage character to the sound as well.

This nice guitar has a spruce top and rosewood back and sides. Hard to find a handmade guitar of that high quality at a reasonable price nowadays.

Its condition is good. It has marks of use and play and a very tiny repair on the top.
The scale is 664 mm and the nut width 54 mm.